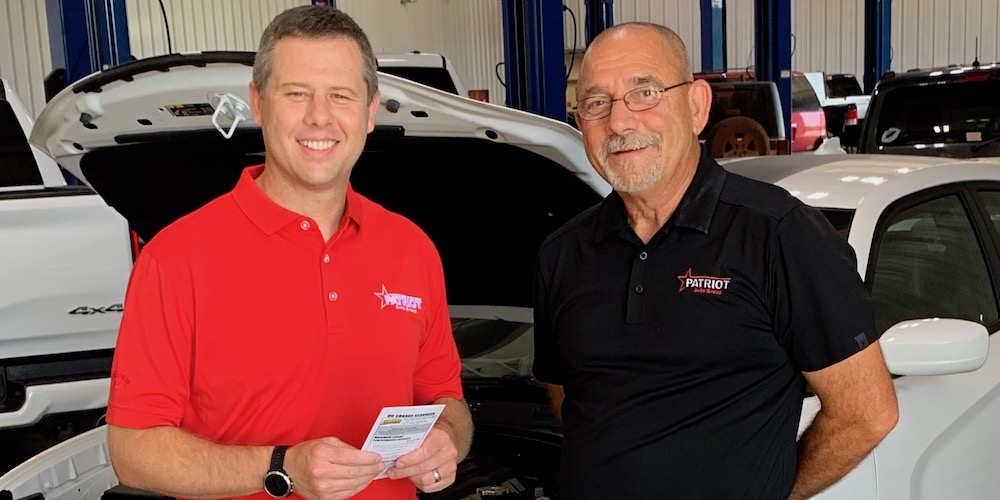 Tatton Manning of Patriot Auto bought the group’s first dealership in 2014 – today they own five. He turned 40 last month! Manning is the epitome of entrepreneurship, determination, ingenuity, and living the American dream.

Manning doesn’t have an automotive background and didn’t get in the business because of a Ph.D. (papa had a dealership.) No, instead he describes his entry into dealership ownership as more of a calling. With the exception of a brief stint as an F&I manager right out of college, he didn’t have any automotive experience at all before he got into the business.

But he had an even greater calling – the U.S. military. Shortly after the war in Afghanistan, Manning would meet soldiers and felt that “these guys are my age and sacrificing everything to protect our freedom – and I’m not doing anything.”

He joined the Army and served from 2005 to 2009, including a one-year tour in Afghanistan. Captain Manning was a Field Artillery Officer in charge of “the big guns.”

After an honorable discharge, he went back to school at night and on weekends, earning a master’s degree in business from Oklahoma State University. His day job was in the oil and gas business, which he continued after graduation. He was successful and his career path seemed set… but he wanted more.

He approached Bob Rosene, CEO of the firm and said, “Bob, I want to own a car dealership, but I can’t afford it.” A partnership was born, and it continues to this day.

“I made cold calls on 14 dealerships exploring opportunities,” Tatton explained. “One of those 14 was Kevin Grover GMC in Wagoner, Oklahoma. Kevin took me under his wing as a mentor and coach. I would work four and a half days a week at my day job, then, I would work at the dealership every Friday afternoon and all-day Saturday.”

With Grover’s help, Manning kept learning and looking – learning the business and looking for his first store to buy. The opportunity came in early 2014 in Bartlesville. Manning is an American patriot, so it was only fitting that his dealership was named Patriot GMC Hyundai.

The dealership was housed in an aging facility with declining traffic and revenues. They had been selling about 30 cars a month and only seeing 280 ROs in service. (Last month they ran over 900 ROs.)

From those humble beginnings the Patriot Auto Group now has five dealerships across Oklahoma. New and used car sales have grown from 190 units to over 900 vehicles per month.

Manning credits Seth Knighton, COO and partner, with the dramatic growth in variable ops, “Seth knows how to buy cars, and sell cars, and grow the team!” he said.

Fixed ops is growing, too. Manning hired Mark Demaro as fixed ops director as his family of dealerships began to expand. Demaro knows you grow a business by growing your people, and the more people you hire, the more customers you can serve.

When they bought their most recent dealership earlier this year, there were three line techs and one lube tech. In just a few months they’ve grown to eight line techs and three lube techs… and they need more!

“The real money is in parts and service; that’s the only way we can hit our net to gross,” Manning concluded.

So how did he do it – five dealerships in five years before the age of 40.

First, he attracted great people; both at the store level and at the corporate level. (just this year he has added a CFO, accounting manager, and HR director to his executive leadership team.)

Third, humility. “That may sound strange, but successful people come with egos – and usually baggage.” Manning explained, “my faith teaches me to be humble. My church family is very important to me and my family. Without my faith I would not be humble.”

“If you always have to be the smartest guy in the room, then you limit yourself. Humility lets me defer to others who know more than me,” Manning said.

Fourth, an emphasis on fixed operations. “We take a variable approach to fixed – meaning we focus on sales! We have service sales managers and service sales advisors at each dealership. Their job description and pay plans are built around sales production,” he explained.

“If you want to increase the bottom line of a RO you start by increasing the top line – which means you must sell service.”

Manning continued, “Many dealers, like me, didn’t grow up on the service side of the business; so my advice is to find someone you trust who knows fixed ops – a vendor, a partner, or a manager. Have them do an honest analysis of your parts and service department – and be prepared to be embarrassed. Most importantly, act on their recommendations. I did, and it paid off!”

“It’s an investment in our customers and in our future – and it’s working,” Manning concluded.

So, what’s next? “Our house is built on the goal of being the best and most respected dealership in each of our markets.”

When asked if more acquisitions are on the horizon, Manning didn’t hesitate for a moment, “we are still on the grow – and managing the growth. I’m always on the lookout!”

Hats off to Tatton Manning; a family man, a businessman, a Christian man, – and a true patriot! *

Tags:
Sales & Variable Ops Automotive Customer Retention Automotive Service Center Sales Automotive Profitability
A Story of Lost Loyalty….and How to Regain It
Value Is Important… So Are You Charging Too Much?

A Story of Lost Loyalty….and How to Regain It

The Fluid Fails Before the Part: A Sales Opportunity!

Value Is Important… So Are You Charging Too Much?

By accepting you will be accessing a service provided by a third-party external to https://bglsi.com/BGProducts_Oklahoma_Texas/