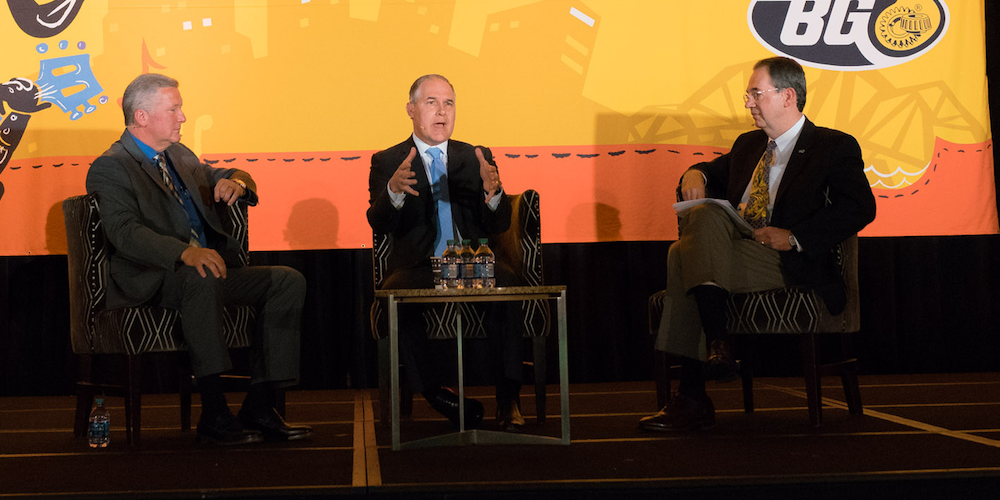 “What is true environmentalism? The Obama administration told us you can’t be about jobs and growth and protect the environment. I simply reject that! We can do both,” according to Scott Pruitt, Administrator of the US Environmental Protection Agency.

“I think true environmentalism is really environmental stewardship. We have been blessed with wonderful, abundant natural resources in this country…and to whom much is given, much is required,” Pruitt continued.

“We need to be about managing the resources God has given us. So, we can do both—providing jobs and growth while being good environmental stewards.”

Last fall I had the privilege of sitting down with Administrator Pruitt to discuss the EPA’s impact on the automotive industry and to gain some insight on what the future holds concerning regulatory mandates. The event, “A Fireside Chat with the EPA” was attended by hundreds of professional automotive fixed ops consultants from all across North America and around the world.

Obviously, the laws and policies that come out of Washington, D.C. affect all Americans, but no agency has more impact on our industry than the EPA. From regulatory bans on lead in gasoline to emission mandates to compliance demands as a result of the Clean Air Act, the EPA has had a profound impact on automobiles.

On the topic of regulation, Pruitt said “One of the greatest issues for businessmen regarding energy and the environment is regulatory uncertainty—is a businessman supposed to follow the regulation (created by a federal agency) or the statute (created by Congress)?”

“The previous EPA created regulations that were not tethered to any statutes. Capital will not be put at risk by businesspeople if there is regulatory uncertainty.”

The Administrator on many occasions has said that the purpose of a regulation is to “make things regular.” In other words, regulations should bring clarity, not confusion. If there was ever an industry that needed consistency, clarity, and certainty, it’s the automotive industry.

Therefore, I asked him about Corporate Average Fuel Economy standards, which are actually set by the National Transportation Safety Board with input from the EPA. The CAFE standard for 2025 is a whopping 54.5 mpg. For our industry to attain that number, which is almost 20 mpg higher than it is today… well, I just don’t see it happening.

Specifically, I asked him to explain the process in order to find out if there’s any way to roll CAFE back to a more attainable number.

According to Pruitt, “the mid-term review in April 2018 is important…in looking ahead to 2025. In essence, the review is to evaluate if the projections were correct…or overly optimistic.”

“The Obama administration rushed the mid-term review by pushing it up 16 months to January 2017.

The EPA under the Trump administration will be doing the review at its appropriate time in April 2018.”

I think it will be very interesting to see what they find out. I am assuming they will find out that the projections were way out of line and I hope they will recommend a lower, more realistic target. We’ll see.

Pruitt went on to say, “Concerning the design of vehicles, we shouldn’t go to Detroit and say, ‘manufacture a segment, a percentage, of your fleet that no one wants to buy!’ Rather, we need to look at what vehicles people are actually buying and then strive to make them fuel-efficient with acceptable emissions.”

Okay, time out. Let that soak in for a minute. Here’s a member of President Trump’s cabinet, a cabinet secretary who runs a powerful federal agency, saying let the people decide. Let the market dictate the direction. Let’s find out what people want and help the manufacturers meet the demands of the market and at the same time achieve environmental mandates. Wow, what a common-sense approach! How refreshing.

“If you make vehicles that people don’t want to buy, then it’s counter-productive,” Pruitt concluded.

It’s counter-productive because people will hold on to gas-guzzling, high-emission, older vehicles longer. That’s bad for the environment and for new car sales.

I pointed out to the Administrator about government involvement designed to influence vehicle manufacturing: specifically concerning mandates for increased fuel economy and decreased emissions. This was the desired outcome, yet the new engine designs are susceptible to fuel deposits and that has had the reverse effect: deposits actually reduce fuel economy and increase emissions.

So, the federal government’s mandates have caused the exact opposite of what they were intended to do. Therefore, I respectfully asked the Administrator, “When does the government need to get out of the way?”

Pruitt responded, “My philosophy is that the market is the better governor of those things. The government, when it mandates certain things or implements price controls, it can have a detrimental effect. It’s always best when technology and innovation control the market. American innovation and technology, when left to drive the process, always work best. Government is slow and reactionary while industry moves to get things done quickly and efficiently.”

It seems to me that the EPA has been a political hot potato since its creation in the 1970s. EPA policies have a polarizing effect in our society with strong emotions on both sides. Pruitt summed it up like this:

“So much of what we do at the EPA has been politicized…and it shouldn’t be. What’s ‘Republican’ or ‘Democrat’ about cleaning up a superfund site? Nothing! Clean water and clean air should not be political…so we are working hard to change the discourse and have meaningful discussion.

In the past, the EPA exercised regulatory overreach and lost sight of its core mission. We are trying to bring clarity as we go forward.

We have lost civility in our discourse—we need to get back to a reasonable discussion.

We need to celebrate the achievements in innovation and technology that we have made in this country with respect to clean air and clean water. We need to embrace how far we’ve come.”

My personal thanks to Scott Pruitt for taking time out of his busy schedule to sit down and discuss the issues that impact our industry. Due to his vision and leadership, I believe the relationship between Washington, D.C. and the automotive industry will be stronger and have more synergy than ever before. The best is yet to come.